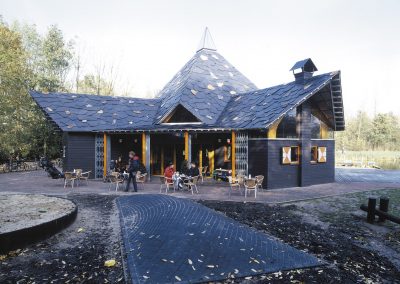 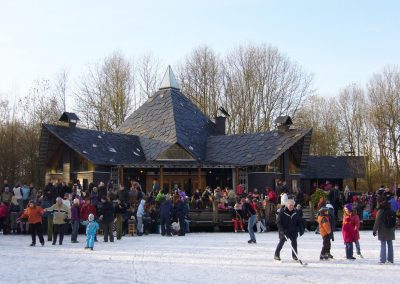 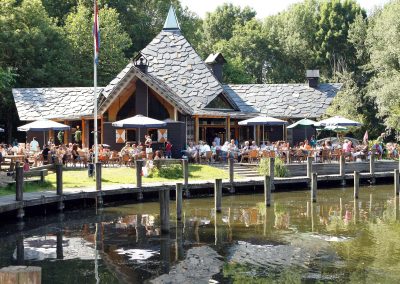 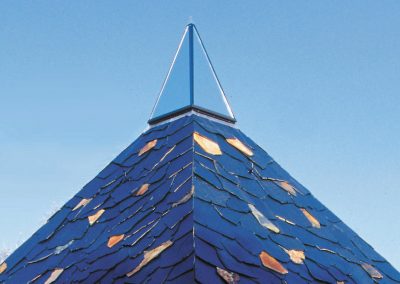 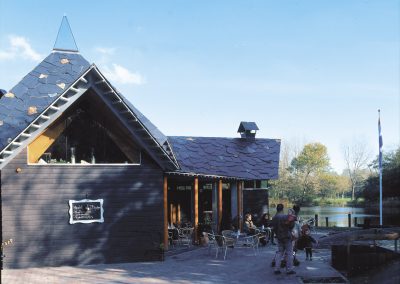 Design a facility to replace the semi-permanent Knus pancake restaurant in the Delftse Hout recreation area, including facilities for the rental of rowing and pedal boats.

The emphasis in the design is on the accentuation of the holiday mood and the picturesque surroundings by employing architecture that is atypical of Holland. The expression is a balance between an American prairie bungalow and a Norwegian mountain chalet. The wooden structure, which seems to rise up from the earth, stands alongside the elongated inlet that connects with the Delftse Hout lake. The ground-plan is composed of a square and a cross that interlock diagonally, resulting in an octagonal middle section. Four of its corners are extended with rectangular chambers: two of these are meant to cater for large parties in a private alcove. The toilets and the kitchen are situated in the two other corners. In the open void above the bar there is a mezzanine for children. The boathouse is a wing-like extension of the kitchen.
Ground-floor verandas fill the outdoor space between the four extended corners.
The building’s structure consists of timber trusses on which the pyramid-shaped wooden roof structure rests, culminating in a transparent glazed apex. Windows in the façade and the roof offer a phenomenal view of the lush, park-like nature. A band of fenestration separates the elevations from the roof, allowing natural light to enter and lending the interior a sense of space. The windows in the weather-boarded façade on the ground floor can be secured with shutters, the verandas with sliding barriers. A striking feature is the highly distinctive roof, which is covered with large slates.