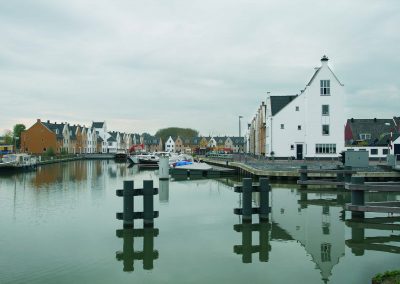 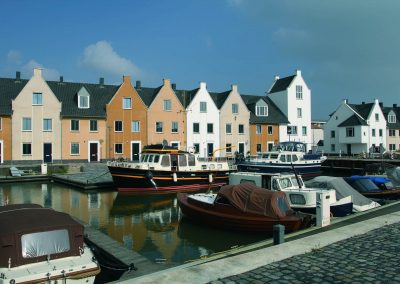 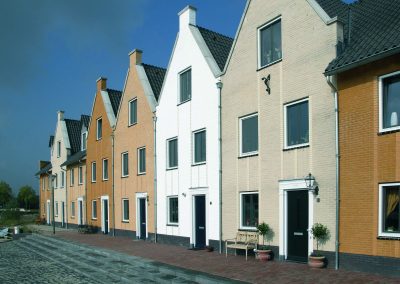 Nieuw Vreeswijk is the name of a former dockland area and industrial zone at the junction of the Merwede Canal and the Vaartse Rijn waterway. De Nijl Architecten further devised the urban plan for this residential zone, after the masterplan by Giorgio Grassi. The ‘Watercourt’ subsector is comprised of a series of three-storey single-family dwellings set around a small U-shaped harbour with courtyard. There are vertical accents marking passageways and in the form of the apartment blocks at the head of the harbour.

Pivotal to the design were the integration of the residential perimeter around the courtyard into a unified whole and the expression of the individuality of each of the dwellings. The ‘watercourt’ houses therefore have a standard roofline. Variation in dwelling size is evident in the bay breadth in those properties with a constant depth and in the deviation in the height of the apex of the gable in the case of broader frontages. Each dwelling offers the choice of living on the ground floor or on the first floor, or indeed a combination of the two.
The individuality of these homes is underscored by different colour schemes for the bas-relief in the individual façades.
After the example of old, sturdy warehouses that are to be found in many ports, the apartments are designed as an ensemble of three ‘warehouses’. Like their precursors they have large, clear-cut and vertically articulated volumes with high roofs. Because they are situated at the head of the harbour and have balconies on the corners, they offer the inhabitants stunning panoramic views. The façades are ochre-coloured and are framed in orange-red brick. They are a forceful gesture that is an attractive contrast to the intimacy of the courtyard.